The Sky-Dweller is, relatively speaking, a youngster in Rolex's collections. While many of the company's staple models have been around, in one form or another, since the 1950s and 1960s, the Sky-Dweller only debuted in 2012 and it was at the time, I think, a bit of a puzzler – a highly technical piece but also very showy; as if a gold Day-Date had decided it wanted a career in aviation. It was and is a quite complex watch, with an annual calendar, GMT function, and a rotating bezel – the Ring Command bezel – which is used to select the setting function for the crown.

The idea is to make setting and using the watch as simple as possible for the owner, but to do so requires a lot of extra work where it's not visible to the wearer – the bezel control ring alone adds about sixty additional components. The presentation of information on the dial is ingenious – the month of the year is indicated in a very economical fashion, via a switching colored disk that appears in a small window, adjacent to the dial hour marker corresponding to the month (the 12:00 marker, for instance, corresponds to December). Home time is shown on a rotating 24-hour ring, and the hour hand can be independently set, in one-hour increments, forwards or backwards. 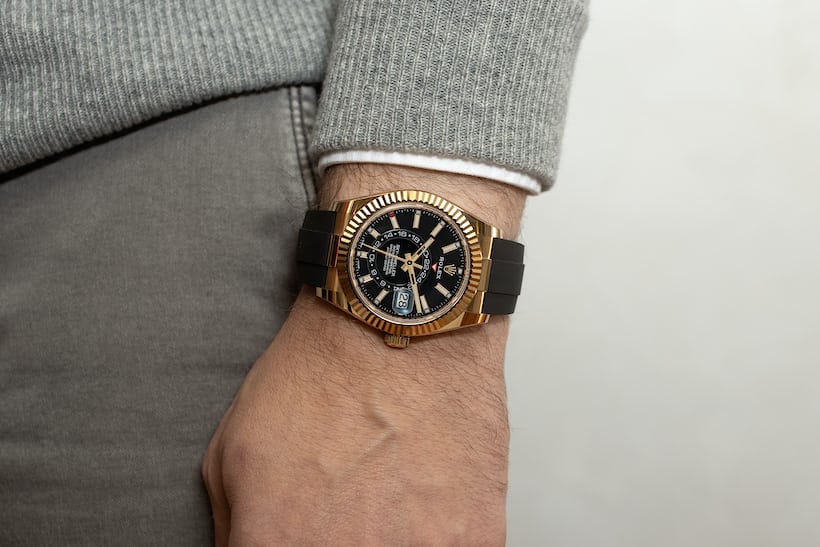 The GMT-Master II has a long history of use as a practical traveling aid, and it's also done time on innumerable pilots' wrists and astronauts' wrists. The Sky-Dweller, on the other hand, is unabashedly a luxury watch – 42mm in diameter, exceedingly extroverted in design. It's a watch that makes no bones about announcing itself, especially in gold. There is a steel version, with a white-gold bezel, with which I spent A Week On The Wrist back in 2018, but that's about as proletariat as the Sky-Dweller gets (it is currently listed at $14,800, which seems surprisingly affordable for a Sky-Dweller, relatively speaking). I actually had an opportunity to travel with the watch (on a quick trip to London and back) and found it, despite its complexity and the somewhat unintuitive-at-first nature of the Ring Command bezel, very easy to use and fun as hell to wear, to boot. As a working travel watch, though, I thought I'd still probably just rather use a GMT-Master II, which even on a bracelet, flies a little more under the radar. 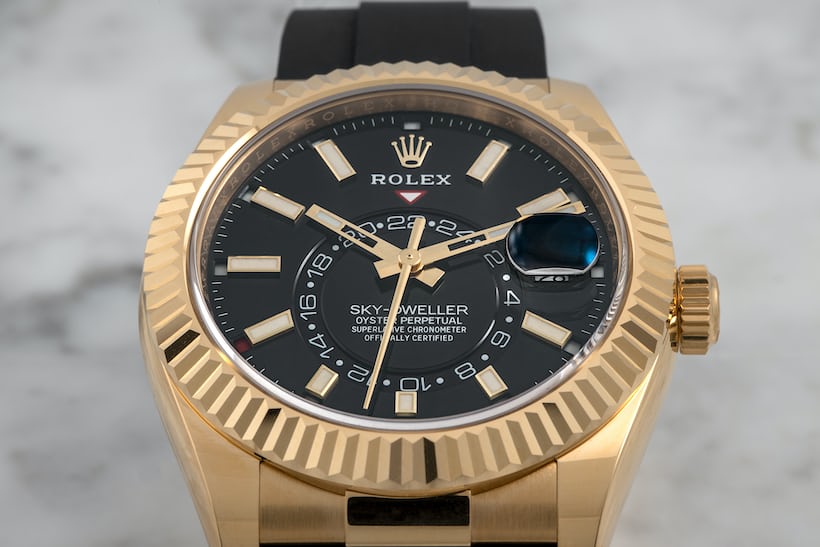 Now, I don't think a Sky-Dweller is ever going to compete head-to-head with a GMT-Master II as a pure tool watch – it's too complex mechanically and too busy visually – but with the Oysterflex bracelet, which is what's new this year for the watch, I think it becomes much more versatile, at least in terms of long-term wear comfort. At 42mm, the Sky-Dweller is 2mm larger in diameter than the GMT-Master II, and it looks and feels it, especially in yellow gold. That fluted bezel, with its diamond-sharp edges, catches the light like a cut-gem too. However, on an Oysterflex bracelet, it almost feels a different watch. 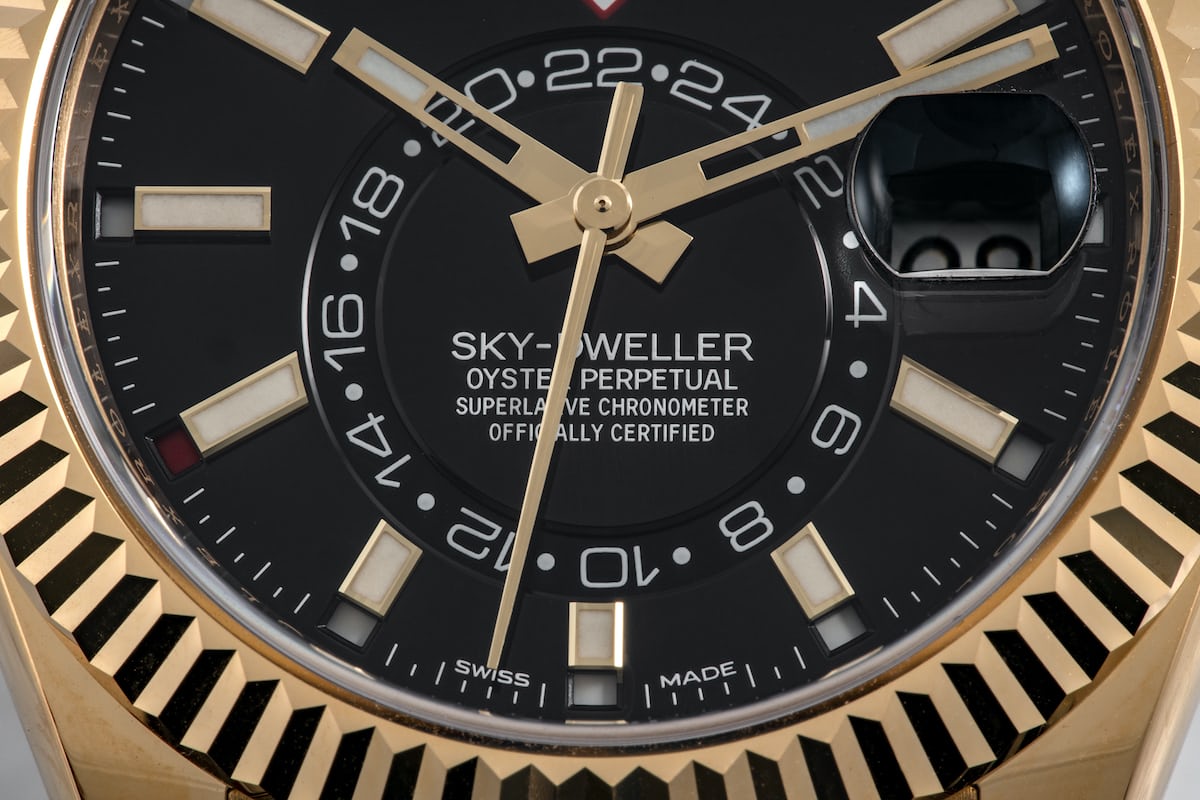 The Oysterflex bracelet is one of the most carefully thought out and elaborately constructed bracelets I've ever seen – I honestly don't know that any other company than Rolex would ever go to the trouble of coming up with such a thing. Rolex calls it a bracelet (and I bet they want you to do so too), but it feels more of a hybrid to me – a combination of the structural advantages of a bracelet with the comfort of a strap. (Of course, comfort is a relative thing; I've worn metal bracelet watches that were terrifically comfortable and watches on straps that may as well have been metal, for all they showed any inclination to make the slightest effort to make themselves conform to my wrist, instead of the other way around.) 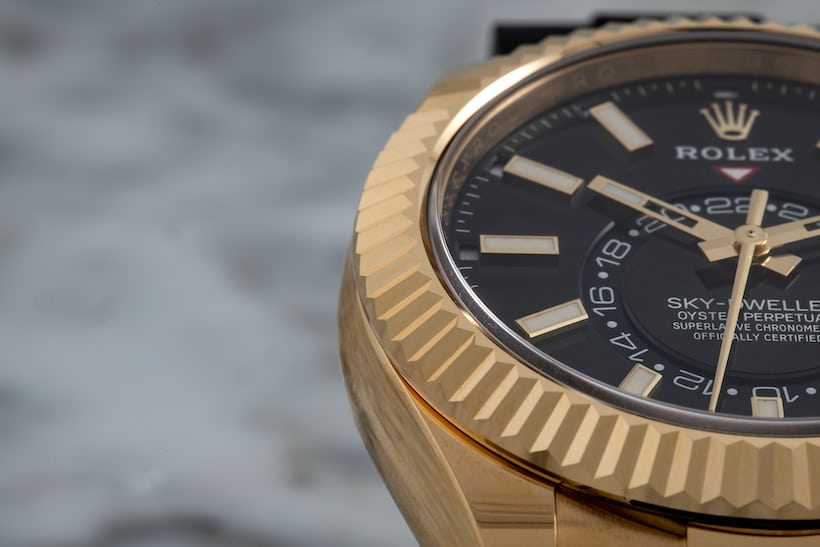 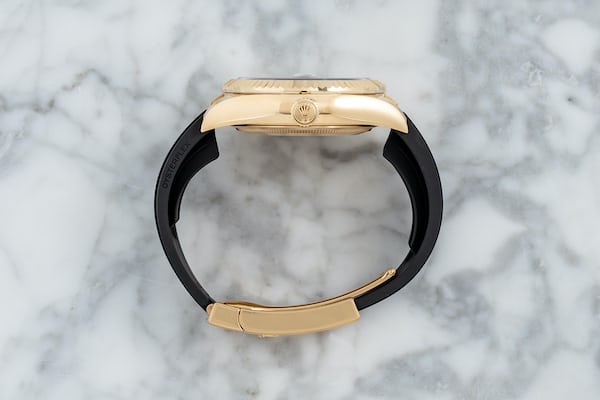 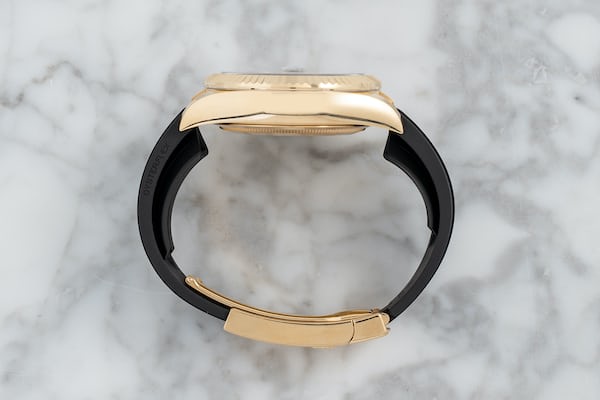 The Oysterflex bracelet basically consists of a thin, flexible metal blade inside a molded elastomer outer coating, but it has another interesting feature as well, which is the so-called "comfort pad" molded into the underside. Now, read about Rolex for long enough, and you can read enough hearsay and speculation in a month to last you a lifetime. One story I've heard, which may be apocryphal but which says something about the company nonetheless, was that they had six researchers with Ph.Ds in materials science working on their bracelets. (The story went on to say that after six years of working on just the bracelet links, one of them – a real go-getter, apparently – went to his boss and asked if he could work on clasps as well; the boss patted him anxiously on the shoulder and said, in shocked tones, "No, no ... you're a bracelet guy.") 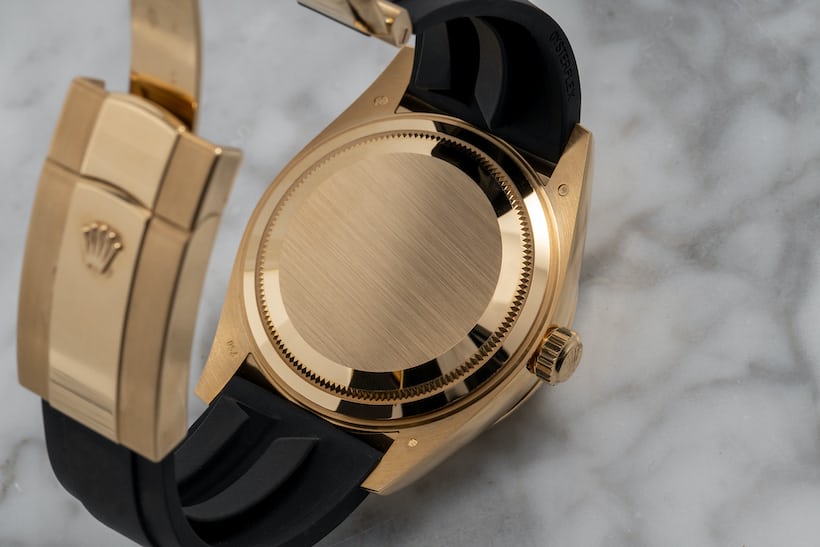 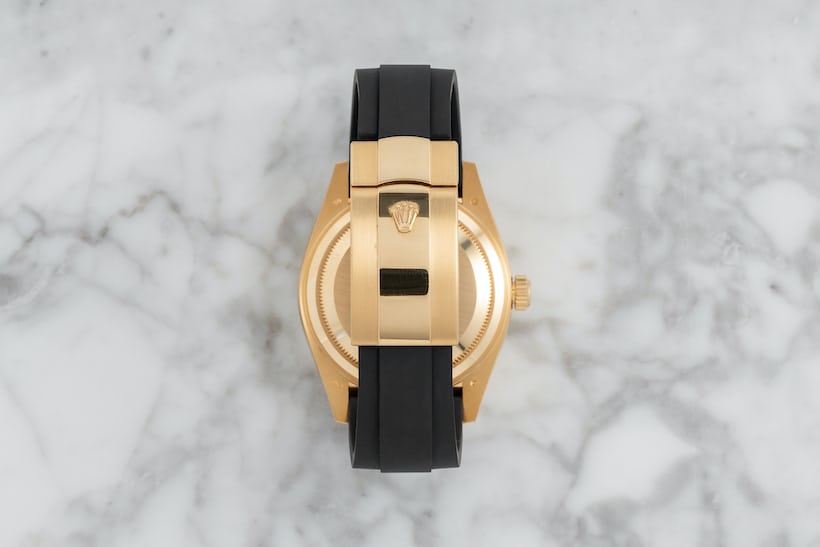 I'd never looked for a patent for this specific feature before, but of course, Rolex being Rolex, there is one. The grant in the U.S. is from 2015, and if you understandably find it hard to believe that guys with Ph.Ds do the bracelet designs at Rolex, looking over the patent might help persuade you. It begins by noting with commendably deadpan seriousness that "some prefer a loose fit, while others prefer a tighter fit," and goes on to identify a number of circumstances which may contribute to a sensation of discomfort while wearing a watch – and then modestly proposing, "In order to respond to these constraints, document JP2002262910 proposes to produce a transverse opening in the thickness of the bracelet strand around the zone where the bracelet strand is fastened to the watchcase, to result in a damping of the stresses exerted by the bracelet on the wearer's arm." The patent actually goes so far as to include a stress-strain diagram. 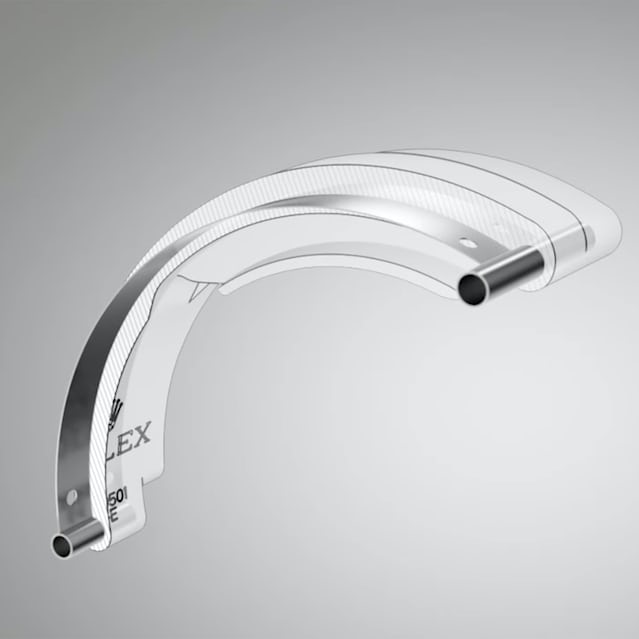 Anatomy of the Oysterflex bracelet, from Rolex.com, showing the flexible metal blade, and elastomeric over-molding.

One of the advantages to being Rolex is that you can really take your time over these things – I've found a Rolex patent for a metal bracelet with plastic molded over it from the 1960s, but of course, taking your time also means being able to get it right. On the Oysterflex bracelet, what was an undeniably well-engineered, very well-built watch, but which felt a little hefty and complex for the rigors of travel, suddenly seems ready to go anywhere and be worn for any length of time – even for the rigors of a long-haul flight. There are always some arguments about whether or not the Oysterflex bracelet is "really" a bracelet, and whether or not Rolex is engaging in some sort of shenanigans by calling it a bracelet when (to be fair) it looks a hell of a lot like a strap, but I'm inclined to give them this one – the over-molding is what you see and feel, but the actual physical attachment of the watch head to the bracelet to the clasp is metal-to-metal all the way around. An Oysterflex bracelet seems likely to considerably outlast any single-material strap out there, certainly. 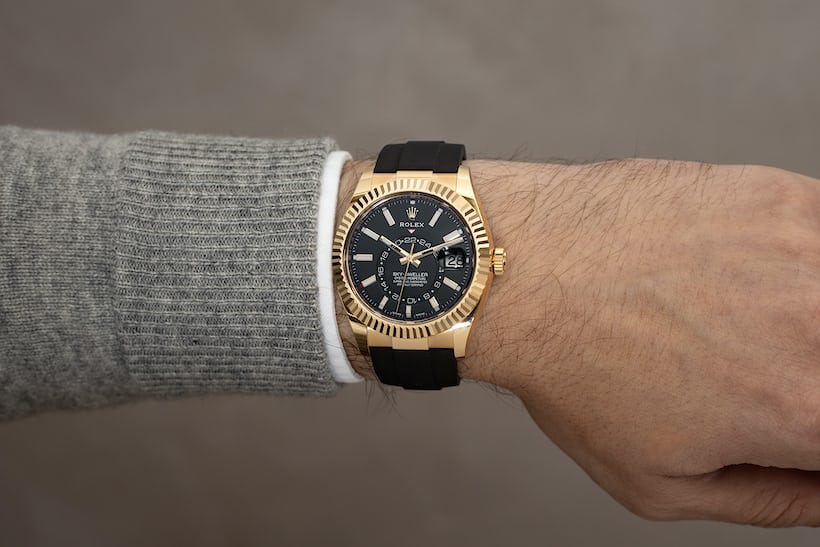 In a world where we change straps on watches with considerable frequency, if not downright promiscuity, it is nice to see this much effort being made to make the wrist a better place. Okay, this is a forty-thousand dollar watch, but at least you don't get the feeling Rolex cut corners on the bracelet. This is only the second time I've worn a watch on an Oysterflex bracelet, and they really are just deliciously comfortable. I wouldn't go so far as to say they make a solid-gold Sky-Dweller into a discreet daily-wearer, but they certainly make it a watch more likely to be your go-to for travel – albeit, if you have this guy, you're definitely traveling up front.